Pixie Stum aka Ice had raised to be the ganger leader of the Glam Chics, but lately was finding that it wasn't what she wanted. There had to be more to life she thought then all the endless fighting & killing just to make more coin for the Guilders. Not that killing ever bothered Ice, so cold was she about it that it was said she must have ice in her veins, which is how she got the name Ice.

Okay the idea of the game is for Ice & the construct PB96 to get from one corner of the board to the opposite one to reach a hanger where a cargo shuttle will soon be lifting off. The game will last for 16 turns, how a game length is decided in Planet 28 is you roll a D10 & add 6 to the score, which means a game will last for somewhere between 7 to 16 turns. Luckily I rolled a 10 as I don't think 7 turns would have been enough here, but it all adds to the excitement I guess.  The blacked out  areas on the board are walls, the green areas are hazardous terrain, to move in hazardous you need to make an agility test, if you pass you treat it as rough terrain, if you fail you take D10 damage - your armour roll. if in rough terrain you make a roll against your agility, pass you move as normal, fail you move half speed. Movement effects shooting, so if a character moved once this turn & was shot at by another who had also moved, the shooters shooting would be reduced by 2. 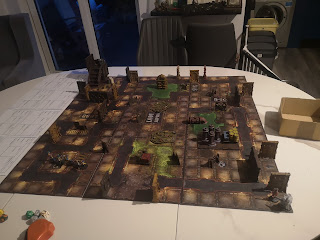 The doors may or may not be locked, this is decided on the roll of a D6, with a 6 meaning that the door is locked, an unlocked door will open automatically as a character approaches it, a locked door will require an agility test, but instead of rolling under the agility score I decided that to make it differently, so a D10 will be rolled & the character's agility added to it needing a 10 or more to open it & will cost an action to do so, door maybe shot or attacked in close combat to destroy them & have 6 hit points & armour of 1D10. The above rules are my own as the game its self has no rules for such things. 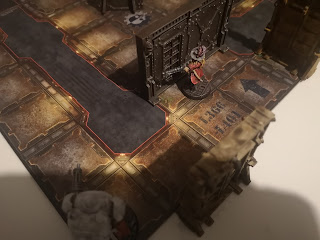 The agility roll for the AI warband was 2 meaning my characters would act first, as Ice moves up to the first door, it open but she finds the second one locked,as it took part of her second move to reach it she can't try opening it turn. 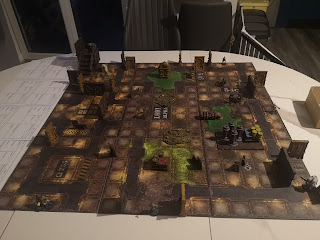 For the AI warband I decided random deployment, I first rolled to see which one would deploy & then rolled to see where, the table is made up of  9 tiles, which meat if I took away the tile where my warband had deployed I was left with 10 possibile places so a D10 roll would decide where they entered, again these are rules of my own making, the game does give rules for deploying warbands but they didn't suit my needs. As my idea was that they had discovered that Ice was taking off & were out searching for her.
Hylda deployed in the tile above Ice, Flori deployed in the top right hand corner, Lacey in the bottom middle & Trinie & Maxi in the bottom left. Hylda move towards Ice & RB96 but finds the door locked. 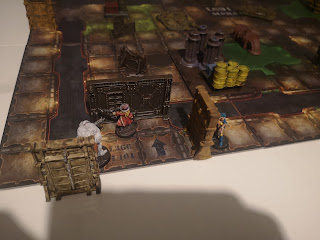 The rest of the gang all double move.  (I forgot to make Lacey test moving through the sludge) 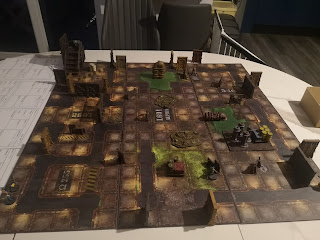 Turn 2 AI warband Agility role is 1. Ice opens the door by passing the test & moves up behind cover Followed by RB96,  who shoots at Lacey & misses.  Lacey fires twice at Ice missing, Hylda still can't open the door & the others move double. 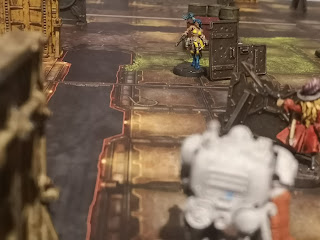 Turn 3 AI agility roll is 2, RB96 fires twice at Lacey missing, Ice then rushes Lacey to get into close combat, ( if a character who has not activated is attacked in close combat, they can decide to attack back) both hit but do no damage.Lacey attacks Ice with her second action but misses, 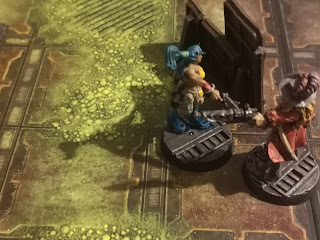 Hylda passes the test to open the door & moves. 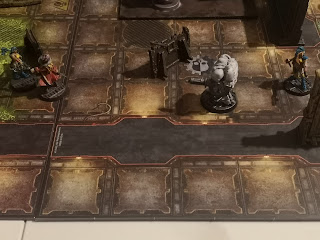 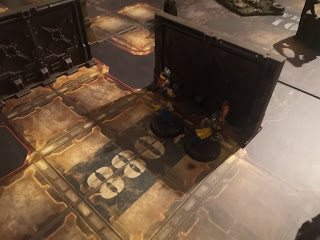 Turn 4 AI agility roll 4, Ice & Lacey continue to slug it out to no effect, RB96  shoots at Hylda twice hits once & does a whooping 16 points of damage, Hylda has to take a break test as she has lost over half her starting hit points (to pass the test you must roll under your remaining hit points on a D10) . 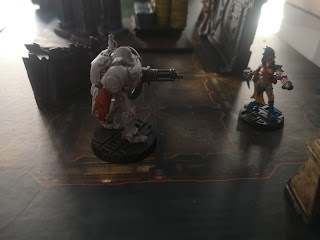 Hylda fails & flees off the board 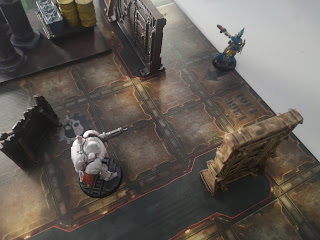 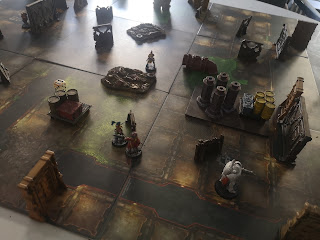 Turn 5 AI agility roll 10, Lacey attacks Ice, both hit Lacey takes 1 damage, Lacey attack Ice with her second action & hits but does no damage, Ice decides not to strike back. Flori fires twice at RB96 doing 1 damage, Trinie, & Maxi open the door & move, (under the rules I'd made up their test to open the door would be an auto pass as this turn their agility 10). Ice breaks off  from combat, ( doing so give Lacey a free attack that she misses. 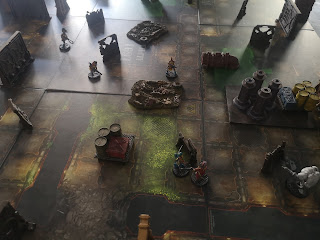 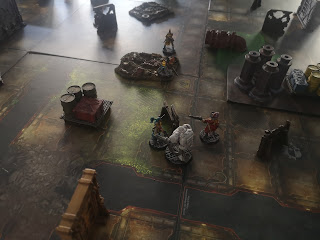 & push her back into the sludge, breaking the combat, if a character is successful in hand to hand combat & by successful I take it as meaning hits & does damage, while not been hit themselves, they can decide to push the character directly backwards 3cm. The rules are a bit vague on this as on one or two other things,so you to go with what you think works best. 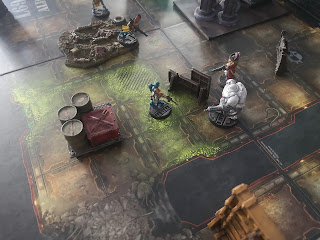 Turn 6, IA agility roll 9. Lacey is now in hazardous terrain, so if she wants to move would need to to take an agility test, which she does & fails, which results in her taking 3 points of damage. 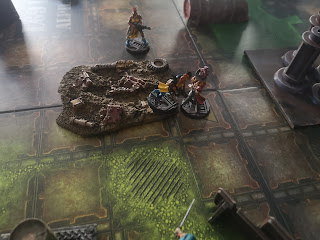 I think I've cover most of the rules by now for you guys, so I'll just add a few things & give you my thoughts on the game from here on out, the rubble in the picture would be rough terrain, now another unclear thing I noticed was if your in hazardous terrain & pass the agility test, the rules state the you then treat it as rough terrain, I take this as meaning you would then have to take another agilely test. 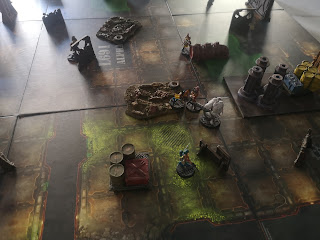 Planet 28 is available as a PDF from The Gaming Vault for a little over 5 dollars US, that give you the main rules, if you wanted to play solo you would then also need to pick up Death on the Periphery, which is around the same price, that as well as having the rules for solo play & has a little campaign. There is also another PDF coving the use vehicles, that about 10 dollars US. 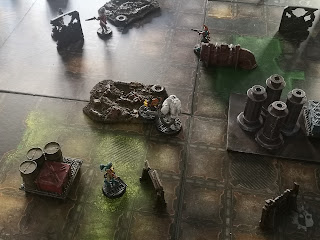 My thoughts on Planet 28 ? overall it a simple little game that gives a lot of freedom as to what you want from it, building a warband is straightforward & again gives a lot of freedom, with been able to build your own weapons & the differant, Traits,Abilities & Arcana powers, you really can build it as you like. 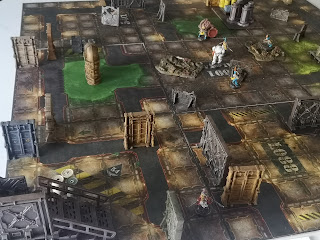 As I said the rules are light, but imo very easy to add to to create whatever its is your looking for.
For solo play the AI warband rules could do with some fleshing out, but again due to how light the rules are that shouldn't be any problem. 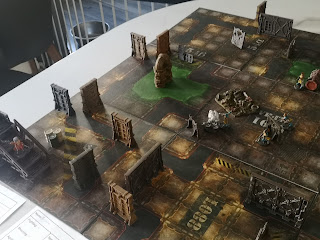 Back to the game & ice has reached the exit point on turn 14, to get off the board she will need to pass two door opening tests. 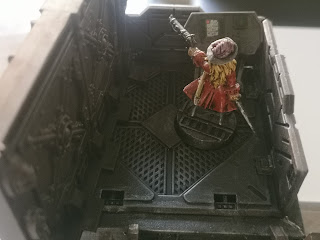 My over all view of how this game work for me, keeping in mind this is my first time, using it I got something's very wrong, RB96 build meant there was very little that had a real chance of doing damage to him. 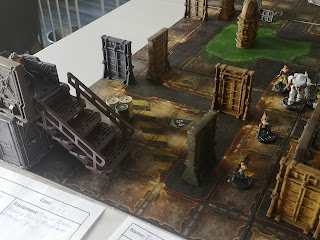 Also when making up the AI Warband I added the in their agility to the cost, which I don't think you're meant to do, but as I've already said I think the extra points you spend on the AI warband needs to be scaled to your own warbands points, so I don't think it was a problem. 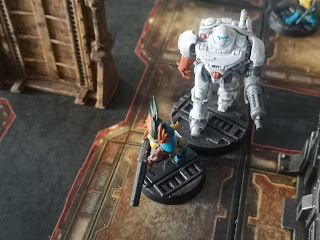 Although Hylda didn't last long I don't thing some of her abilities would have been of use, luckily for me her roll on the table at the end of the game seen her die. 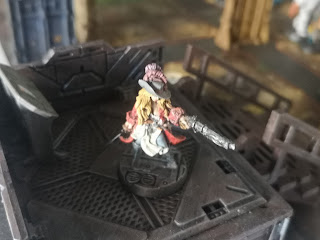 Turn 16, ice opens the door & enters the shuttle bay just in the nick of time, 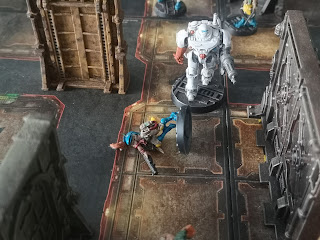 Leaving RB96 behind, which solves another problem for me as he won't now be in the next episode. 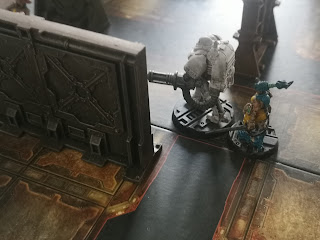 Yes this is going to be a little campaign, I'll cover the rewards each character got in another post, & hope you found this one interesting.
As always my thanks for dropping in and if you'd like to leave a comment it would be welcomed 😊
Posted by Frank O Donnell at 01:03